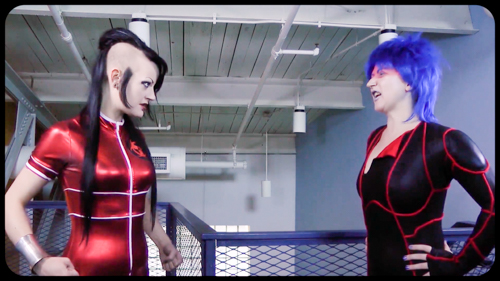 “Anger Is An Energy” (Cybrina vs. Red Gina)

Episode Details
Gina Garibaldi bootstrapped her way through Carnegie Mellon University after a sordid history of drug use and teen pregnancy. Meanwhile, fellow CMU grad Sabrina Walters is a genius coder, yet restricted by her sexist boss at Cybertech Industries from doing anything than receptionist duty. Gina and Sabrina both acquire powers during the night of the meteor. Gina experiences disappointment as various companies refuse to hire her due to her tattoos and piercings. Sexual harassment during an interview becomes the last straw. See what happens when she explodes in righteous rage as Red Gina. Can Cybrina enter cyberspace to stop Gina in time before someone gets killed at Cybertech? 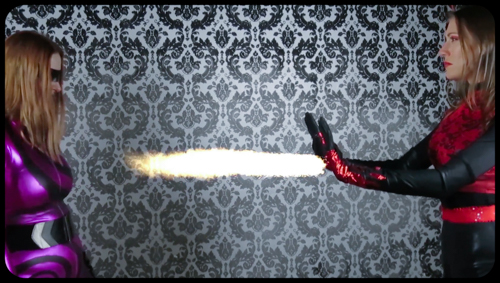 Helena Brent is a fashion designer who loves heavy metal music and dabbles in Satanism. Her boyfriend Mike is a guitarist in a local metal band. The dark energy meteor activates her demonic powers as Hellfyra. Despite an ambivalent moral nature, she decides to use her powers for the benefit of the music scene, which is plagued by a mysterious thief who has dubbed herself Mesmera. The hypnotic villainess becomes increasingly addicted to using her powers, striking repeatedly. Will Helena and Mike be able to apprehend the culprit? 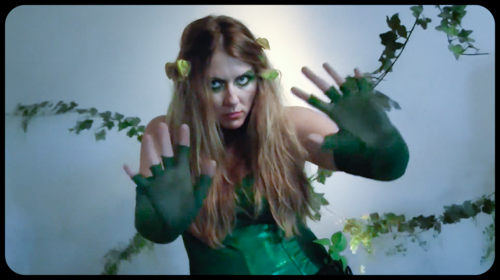 Episode Details
Rebecca Bloom is a Sunday School teacher and an activist who canvasses door-to-door for environmental causes. The meteor’s dark energy finds her in the backyard garden. Meanwhile, psychologist Harry Switzer is distraught about his rejected plans for a carbon-scrubbing system. Helping his patient Debbie realize her full potential, the transformed duo of Dr. Shvitz and Devorra unite in a resentful scheme to hold the city hostage. Can the novice nature-controlling superheroine prevent the villains from building a machine to smother Pittsburgh in carbon dioxide? Can she unlock a secret power when it is most needed? 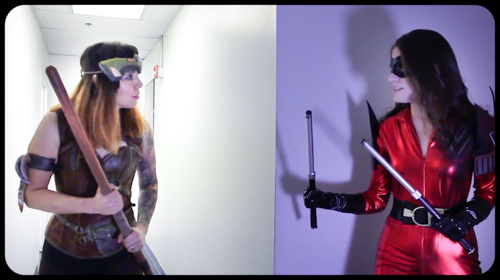 “Trans-Adriatic Express” (Vendetta and Devana vs. Earthmover and Clockcleaner)

Episode Details
Veronica Benedetti is a pre-law student at Pitt, but her father is the head of the mafia in Bloomfield. A power grab by a disloyal consigliere murders her best friend. After acquiring exceptional skills during the meteor incident, she embarks on an agenda of revenge as Vendetta. Across town, Serbian immigrant Marija Bielic is indignant about her brother’s debt to the vicious Serbian mob. The meteor grants her the powers of Devana, the Slavic goddess of the hunt. She tries to keep her brother from harm. The Serbian and Italian factions unite to stop the heroines by hiring two superhuman mercenaries. Will the personalities of Devana and Vendetta clash, or will they work together to vanquish their common foes? 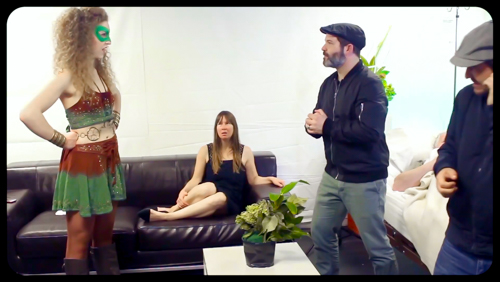 Episode Details
Fallon O’Shaughnessy is the daughter of a dedicated Pittsburgh police officer. She just received an acceptance letter from the police academy. During the night of the meteor, she dreams about Celtic warrior queen Boudicca, and receives extraordinary powers that transform her into the Irish heroine, Fianna. Meanwhile, her father is placed in mortal danger thanks to a stray bullet during a gang bust. Can Fallon defend her devoted girlfriend, Carrie, and her dad from the Greenfield Gang, and will she follow in her father’s footsteps by becoming both a cop and a superheroine? And who will be the city’s new superheroine liaison? 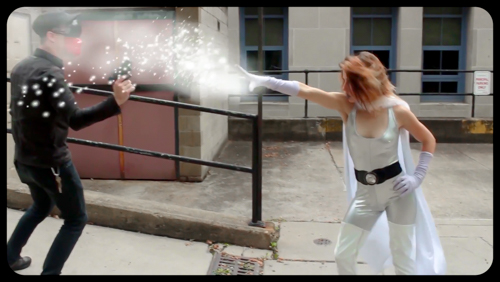 Episode Details
Greta Bjornsdottir and Katrina Spector are scientific partners, working closely at the Innovation Center on a project using superconductivity and laser spectrography to create a source of almost unlimited energy. But they are running out of time and funding due to their uncaring supervisor, Dr. Chiang, and their experiment backfires when they accidentally release an interdimensional being, Morphia, who is an energy vampire. Due to the meteor, Greta has acquired powers of extreme cold as the heroine Arctica, while Katrina can control the entire electromagnetic spectrum as Spectrina, who has an unrequited crush on her labmate. Can the pair contain Morphia’s voracious hunger, while getting the support from Dr. Chiang to succeed in their experiment? 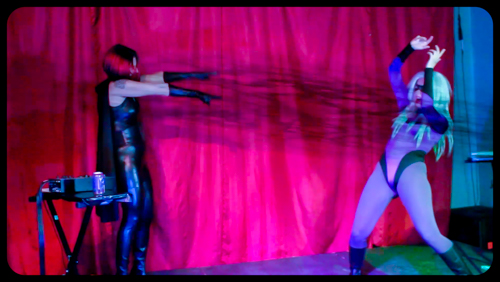 Episode Details
In a story featuring characters and music from Pittsburgh’s gothic-industrial subculture, rival DJs Arielle Kane and Vanessa Luna square off when, on the meteor night, they acquire powers of dark and light that transform them into Arcana and Lunessa. They join forces at the Captive Club with newly arrived Utah transplant Esther Fraser, whose powers of pheromonal bliss manifest as the heroine Etherea. Forming the superpowered DJ team The Dark Dominion, they promote a popular dance night, but they are challenged by a formidably shocking upstart who robs the club and calls herself Industria. Can the trio reclaim the club owner’s money and thwart Industria’s attempt to usurp their DJ thrones? 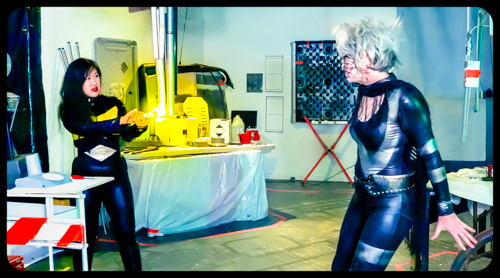 “The Liquid Engineers” (X-Machina vs. Dysphoria)

Episode Details
Carnegie Mellon mechanical engineer Kimberly Chiang is designing a vehicle that runs on a magnetic track. Her lab assistant Maris Solas feels overworked and underappreciated. During the night of the meteor, Kim is bombarded with dark energy that not grants her magnetic powers, but also the ability to instantly fix and repair any machine. As the heroine X-Machina, she feels a compulsion to fix broken machines around campus. But a lab accident with a laser combines with the meteor’s energy to give Maris the power to decay whatever she touches, the resentful lab tech transforms into the evil Dysphoria, bent on making Kim and her boyfriend Bobby’s lives into hell. Can X-Machina use her mechanical genius to figure out how to calm Dysphoria down and redirect her powers for the benefit of humanity? 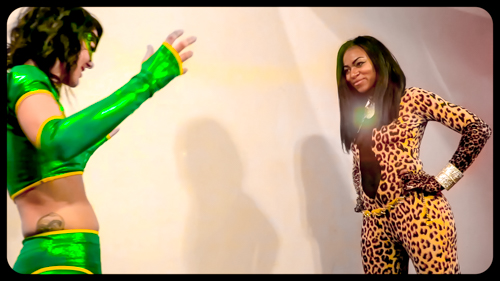 Episode Details
Veterinarian Anna Sauvage is responsible for the health of the large felines at the Pittsburgh Zoo, from which herpetologist Sarah Pentini has just been fired for conducting illicit venom experiments. When the meteor strikes the city, the dark energy imbues Anna with the powers of the big cats, including strength, speed, agility and heightened senses, as well as sharp claws. Meanwhile Sarah’s serum combines with the same energy to transform her into the vengeful Serpenta, possessing the powers of snakes, including hypnosis and a poisonous bite. Sarah goes to work for developer Mason Brick, who is attempting to drive out the residents of Homewood so he can buy up their properties. Anna discovers Brick’s plan thanks to her mother, and then works with her wise pastor, a relic-hunting professor, and members of her church’s youth group to debut as the cat-powered heroine Savanna. Can Savanna stop Brick and Serpenta and save her neighborhood? 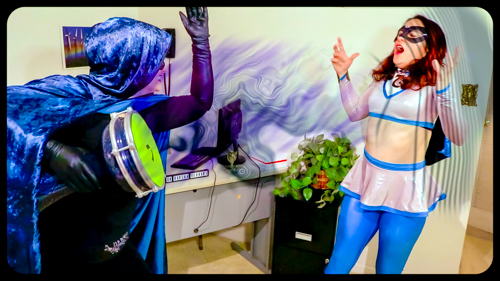 “Reap The Wild Wind” (Jinniyya vs. Darbouka and Dyna)

Episode Details
Scientific inventors Zaynab El-Bahri – a Lebanese Maronite working at the University of Pittsburgh – and Darsha Bukhari – an Afghan Muslim refugee who just earned her American citizenship – are working together on a project to make windpower viable as an alternative to fossil fuels. Darsha receives a phone call from oil baroness Olivia Queen, offering to buy out the pair’s windmill designs. That night during the meteor strike, Zaynab and Darsha absorb superpowers. Darsha adopts the persona of the greedy Darbouka, wielding massive sonic blasts and stealing her partner’s files to sell to Olivia the Quingpin. Zaynab, on the other hand, becomes the virtuous Arabic heroine Jinniyya, with augmented strength and the power of the winds. Can Jinniyya stop Darbouka and turn her to the side of good? And what happens when the Quingpin’s superstrong henchwoman Dyna challenges them to a battle royale? 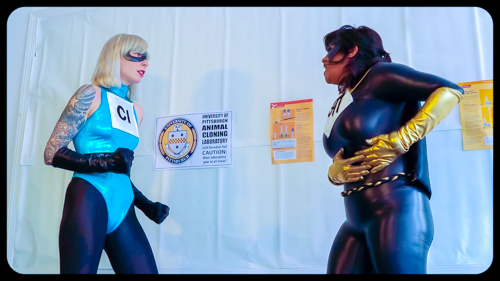 Episode Details
Dr. Maitreyi “Marty” Gupta and Dr. Claire Morena are postdoc interns in genetic biology at the University of Pittsburgh. Marty turns down a proposal from Claire to collaborate on a human cloning project. That night during the meteor bombardment, Clare wakes up with the power to emit toxic gases that poison the mind, and becomes the vindictive Chlorina, taking over the lab for her unethical experiments. Meanwhile, Marty discovers that she has the ability to alter biological tissue. Inspired by the legend of a Vedic god from her Hindu heritage, she becomes Arogya the Healer. Can Arogya free the lab techs and stop Chlorina from carrying out her evil scientific scheme? And what’s the secret of the unholy alliance between Officer Drake and the smoke-shrouded villainess, Vaporia? 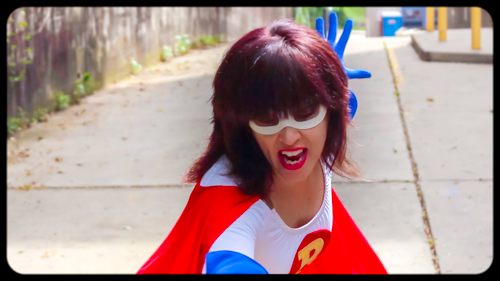 Episode Details
Puerto Rican-American TV reporter Rosa Perez is at the bottom of the news team roster, always sent to the boonies to cover marginal stories with her loyal cameraman Pete. She also has two children, Max and Lisa, whom she dearly loves and supports. When the meteor explodes above the city, Rosa gains a bevy of impressive superpowers which enable her to defeat a gang of bankrobbers and clean up the house at super-speed. But when the station manager offers her a huge raise to become the official Channel 16 representative, will she rise to the public challenge and also champion the Latino community? And how will Max and Lisa react to Mom becoming a costumed superheroine? 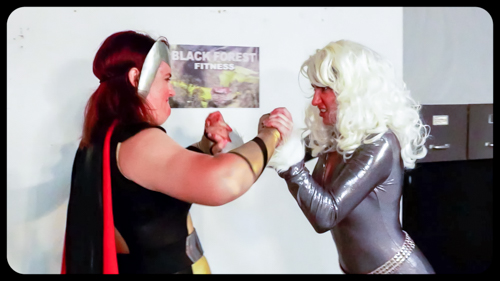 Episode Details
Angela Schwarzwald is a German immigrant who parlayed gyms and nutritional supplement stores into the multi-million dollar empire, Black Forest Fitness. With her assistant Marlena, she has ambitions to become the most powerful woman in the city and an influence in the Republican Party. Infused by the meteor’s dark energy, she wakes up with the strength of forty men and realizes her dream is a reality. Meanwhile, petty burglars Penny and Dwight Fuchs have also acquired superpowers and dubbed themselves The Fox and The Hound. Their next caper finds them invading Angela’s office, but will the entrepreneur defend her domain? And when Angela becomes Teutonic uberfrau Frija, will her membership in the new Pittsburgh Heroine League spark a leadership conflict with the mighty Poderosa? This episode concludes Season One of Heroineburgh….and features 16 heroines!